Since I’ve now reached the point that I’m reading new Star Trek books as fast as they are being made, as well as slowly picking up older ones here and there, I figured I should start sharing the knowledge I have gained.

The first review I wrote is now available here (I actually wrote this several years ago – I just updated the formatting) and I intend to write more.

Of course, I’ve generally intended to write more before…

This was originally posted on 2011-05-20 at 10:22, but has been reposted because of cool layout updates. Also, as part of my plan to post more reviews of Star Trek novels.

I recently started buying and reading a lot of Kindle Star Trek novels (on my Nexus One Nexus 4 incidentally – I don’t have a Kindle). Although a part of me is mildly worried and annoyed at the closed DRM’d nature of Kindle eBooks (and often the price) the ease and convenience has won out.

Star Trek novels have a improved a lot since I read them previously many years ago. Not necessarily the stories themselves but that there seems to a serious concerted effort to maintain continuity between, but without requiring too much knowledge of other books to read any given book (although there are more series now which obviously do require you to read them all for it to make sense).

With that in mind, before reading DTI: Watching the Clock you should definitely read the Destiny series and possibly the Typhon Pact series and the Titan series. Everything you need to know about them is explained in the book but it does spoil them a little if you do intend to read them at some point. 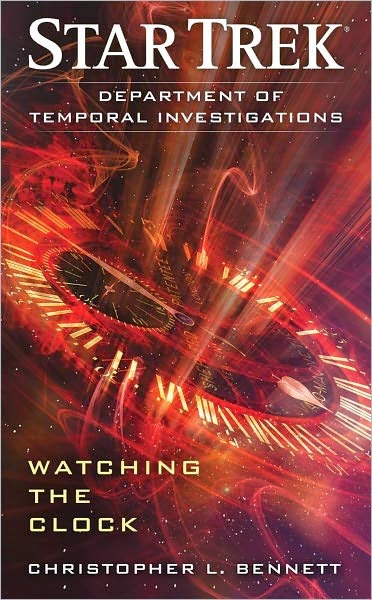 If you ever thought time travel in Star Trek didn’t make sense (and would like it to) then this book is for you. Truly awesome.

Time travel in Star Trek has always been a slightly problematic topic. Featured as the primary plot device in many episodes (and several movies), it was always handled differently and never followed any discernible rules. This book tries to straighten this all out (or as Douglas Adams once said make it, at least, firmly crooked) and on the whole, succeeds.

The book feels like a collection of short stories about time travel, tied together with an over-reaching story arc (complete with seemingly insignificant events in one “story” that become important later). Many of them are about how the DTI dealt with the aftermath of different time travel events in the show. In fact practically every Star Trek episode that dealt with time travel is mentioned (except for new Star Trek movie) and explained to some extent. A couple of the big ones (specifically Star Trek: First Contact, the Temporal Cold War and the whole of Voyager) are more central to the story.

Aside from the technical aspects of time travel, the book also devotes time to expanding the main characters, Dulmur* and Lucsly, who were introduced to us in the Deep Space 9 episode, “Trials and Tribulations”. As the blurb says: “There’s likely no more of a thankless job in the Federation than temporal investigation”. Considering how interesting the time travel elements are, I expected to find these parts more boring than I did. In fact after seeing how they deal with some of the Starfleet officers (and more specifically how the Starfleet officers deal with them) I thought about Sisko’s reaction to them and found him downright annoying.

So the bottom line is, the only reason I can think for a Star Trek fan not to read this would be that you want to read some of prerequisite books first (Destiny, Typhon Pact, Titan).

*Dulmur or Dulmer? I always thought Dulmer since their names were supposed to be anagrams of Mulder and Scully. The author however uses Dulmur consistently and there is a point in the story where the spelling confusion is referenced explicitly.